« Mister X has always puzzled me. I’ve never been exactly certain where he came from. It seems like he has always been present — maybe not skulking through the perplexing shadows of the city so much as through some kind of collective unconsciousness. » — Dean Motter (1986)

On this day, back in 1953, the celebrated art director, graphic designer, writer-illustrator and cartoonist Dean Motter was born in Berea, Ohio, not far from Cleveland.

Over the course of his illustrious career, Motter has flitted in and out of comics, often in tandem with a rather remarkable array of collaborators, among them Jaime Hernandez, Paul Rivoche, Seth, Ty Templeton and Michael Lark… but just as frequently on his own.

As you’ll see, though he is quite adept in a vast range of media and techniques, nearly all of his mature work is lovingly filtered through his abiding interest in Will Eisner’s The Spirit, film noir, Art Deco, German Expressionism, with, I’d say, a soupçon of Soviet Propaganda art… resulting in a surprisingly cogent and coherent retro-futurist vision. The future as seen from the past, in short. And that’s just the visuals.

Aside from his comics work, Motter spent a considerable part of the 1980s working for the Canadian arm of what was then the biggest (and possibly stingiest) record label in the world, CBS/Sony, shepherding or designing beautiful and clever covers for albums that were often neither… but that’s an art director’s job, cynical as it may seem. Anyway, you know you’ve made it when your work rates a pastiche decades on; to wit:

What is there left to do but to warmly wish Mr. Motter the finest of birthdays… at a safe distance? Alles Gute zum Geburtstag!

Which child hasn’t passed through a temporary fascination with Venus flytraps in particular, and carnivorous plants in general? From there it only takes a tiny shift of the imagination to arrive at man-eating plants, which grab their victims with murderous tentacle-like tendrils, crawling vines and grabby creepers. Today we delve into one of my favourite sub-categories of tentacle obsession: plant tentacles.

This spine-chilling greenery often deploys its lethal vines in some remote corner of the Earth (well, in comics, at any rate). This, I firmly believe, is far scarier than the idea of other planets harbouring these carnivorous forms of life. After all, our chances of landing on Mars or somesuch are slim, and we’re a lot more (though not very) likely to wind up in some mysterious jungle.

But first, we deal with that old trope about a power-mad scientist breeding some man-devouring monstrosity in a pot, garden or greenhouse.

When I was a wee girl, my dad would give me piles of adventure books to read. Quite a few of them involved some intrepid explorers discovering (or literally falling into) a jungle (often hidden in some volcanic crater) in which prehistoric creatures had somehow survived (among the novels I remember reading were Sannikov Land and Plutonia by Vladimir Obruchev, The Lost World by Conan Doyle, Journey to the Center of the Earth by Jules Verne, The Land That Time Forgot by Edgar Rice Burroughs, etc.) Cue dinosaurs and woolly mammoths! As I loved dinosaurs, I didn’t mind this recurring theme, which by now seems a little, shall we say, hackneyed.

The cover story, The Deadly Jungle, is scripted by Paul S. Newman, penciled by Giovanni Ticci and inked by Alberto Giolitti. 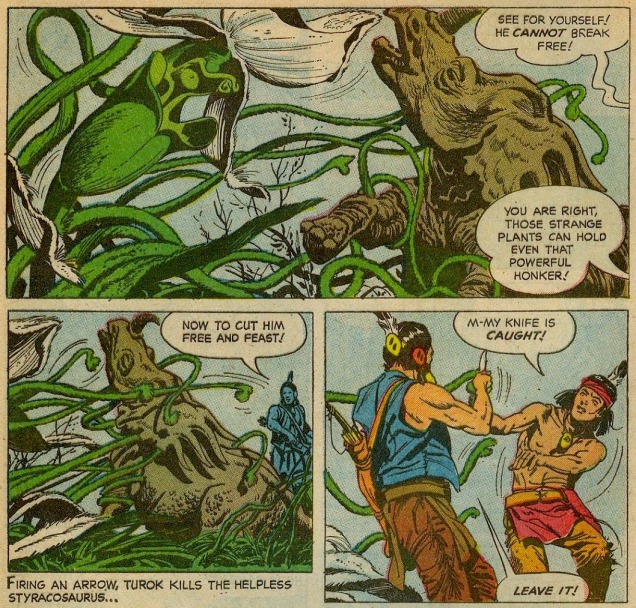 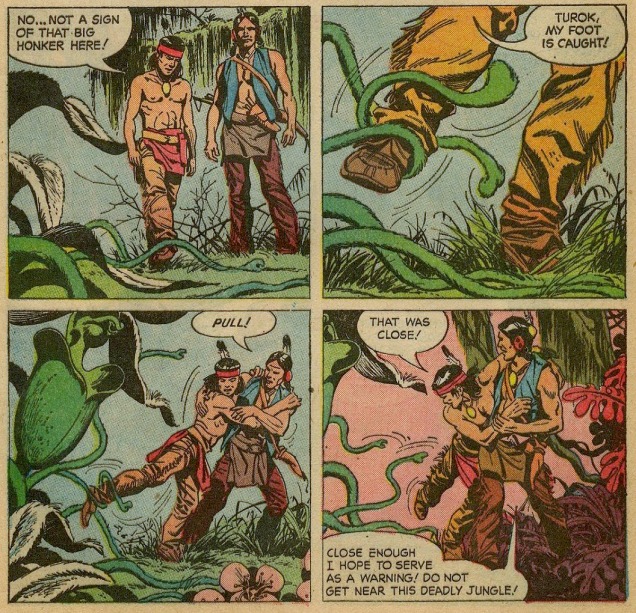 Very much on topic is this installment of Land Unknown (a comic adaption of the 1957 science fiction movie), scripted by Robert Ryder and illustrated by Alex Toth, published in Four Color no. 845 (August 1957, Dell). 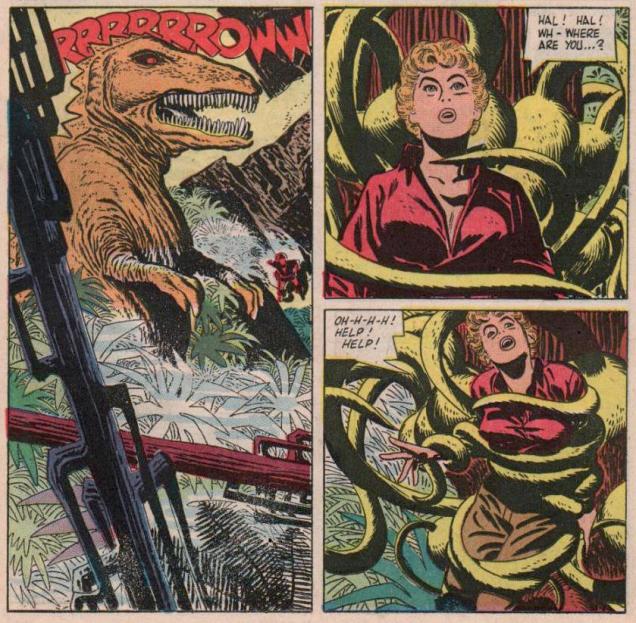 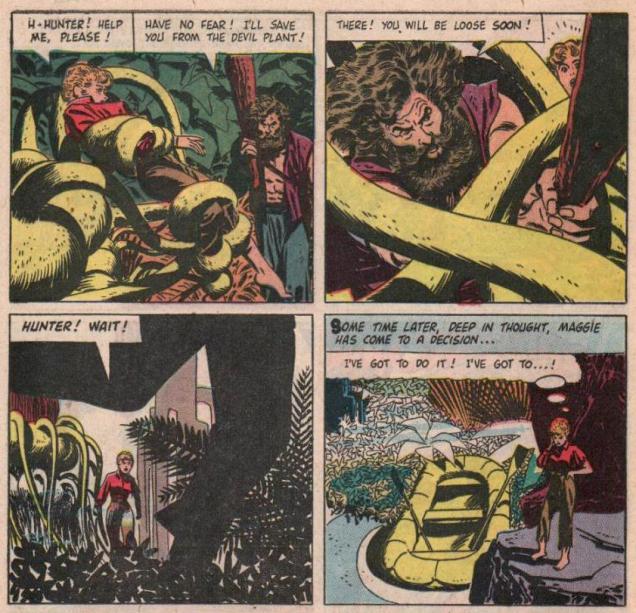 I shall doubtlessly return to this topic again. In the meantime, visit Plants sometimes have tentacles too and The Hungry Greenery.

By the way, the Drosera plant (more precisely, a genus that includes about 152 species) – called Sundew in common parlance – is not only lethal, but beautiful, too.

« The stranger’s face was entirely obscured by a broad-brimmed felt hat bent downward over his features; and the long, black coat looked almost like part of the thickening fog. » –Harry Vincent first encounters his future employer. (Shadow Magazine, April/June, 1931)

We note today the birth anniversary of Walter B. Gibson (September 12, 1897 – December 6, 1985), an extremely prolific writer and professional magician. Gibson is best known for developing the radio character of The Shadow, through nearly three hundred stories he wrote under the collective nom de plume of Maxwell Grant.

The Shadow’s had an interesting and varied career in comics, but Gibson’s novels (and the radio shows… Orson Welles!) are where it’s at. Still, let’s take a look around, shall we?

As a bonus, let’s slightly depart from comics proper and admire a couple of paperback reissues from the brush of noted fabulist James Steranko.

*which everyone apparently’s been denying since.

For today’s Tentacle Tuesday post, I’d like to highlight some comic book artwork from the Golden Age, which is to say the period between the early (or late, depending on who you ask) 1930s and 1956, the year Showcase #4 was published, heralding the new era of superhero comics. (Our other TT post dedicated to the Golden Age was about Planet Comics; visit it here).

The Blue Bolt gets tangled up in quite a few (crushing, of course) tentacles. Art by Jack Kirby. 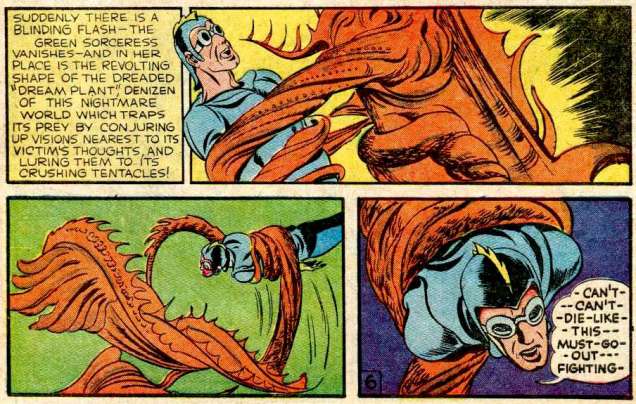 And a few pages later…. 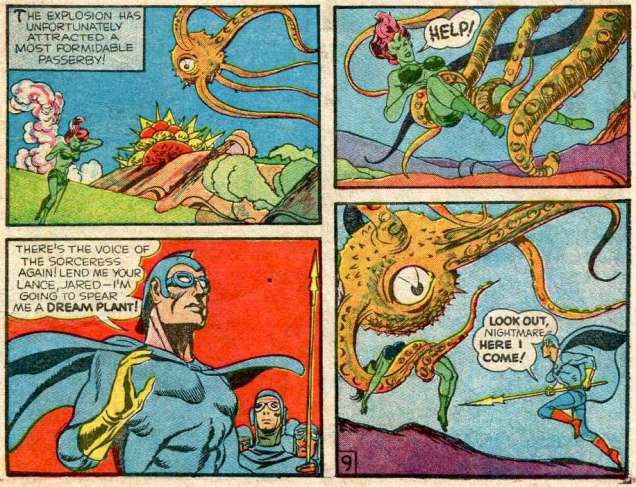 It might be surprising to see the Shadow in the grip of an octopus, but there’s probably not that many creatures he *hasn’t* grappled with!

When a radio show was introduced in 1930 to boost the sales of Detective Story Magazine, the company (Street & Smith Publications) wasn’t expecting its freshly-minted narrator, The Shadow, to hog the limelight – but that he did, as listeners found this sinister character far more compelling than the stories he was narrating.

As his fans kept requesting copies of The Shadow magazine (which didn’t even exist at the time), Street & Smith obliged and The Shadow Magazine was born in 1931. The Shadow’s step-father is Walter B. Gibson, writing under the pen-name of Maxwell Grant. He wrote « more than 300 novel-length » Shadow stories to meet the demand of a public greedily clamouring for its hero, although at some point several writers were hired to lighten Gibson’s ridiculous workload. The Shadow soon slunk beyond the confines of pulp novels and into comics: a syndicated daily newspaper comic strip (written by Gibson and illustrated by Vernon Greene), preceded (by a month) by a comic book published by Street & Smith, which was supposed to attract a younger audience to pulp magazines (101 issues, from 1940 to 1949).

Speaking of heroes, Wiki calls The Shadow « a film noir antihero in every sense »; now, I’ll concede the film noir, but I’ll balk at calling him an anti-hero, at least in this incarnation, as *that* term is defined as « a character who lacks conventional heroic qualities such as idealism, courage, and morality », all of which The Shadow has abundant reserves of. He’s a bit laconic and brusque with this conspirators, but that’s understandable when he had to destroy peace-threatening crime rings and bring brilliant crime-perpetrators to ruin at least twice a month.

Who’s that handsome guy shooting commercials for Crackety-Wackett Cereal? Why, it’s Lars of Mars, the debonair Martian! In between fighting his communist arch-enemy (it was the 50s, what can I say?) and robots harassing women, Lars likes to relax by grappling with tentacled creatures.

Lars of Mars was created by Siegel in 1951 for Ziff-Davis. There are only two issues (bizarrely numbered 10 and 11). The art for Lars of Mars, done by Murphy Anderson, is very nice indeed, but you don’t have to take my word for it. Feast your orbs on the first two delightfully nonsensical LoM stories on Pappy’s Golden Age blog.

« Scarlet’s adventures are never run-of-the-mill. Instead she enters into every phase of American life – whether on the baseball field or in a night club – always finding a way to help her clients, aid the forces of law and order… and bring plenty of thrills and laughs to her readers. »  Apparently « every phase of American life » includes being on the ocean’s floor, trying to stab an octopus with only 5 arms. Hmm…

Incidentally, Invisible Scarlet O’Neil is supposed to be the first heroine with superpowers (well, one superpower: invisibility).

If I may be excused for going off-tentacle-topic,  « Blood of a Monster », the title story that takes up half of this issue, is surprisingly good (though it doesn’t really contain tentacles aside from a minor mention of cephalapoda at the beginning). The art (by the aforementioned Russell Stamm) is moody and quite unhinged in places. 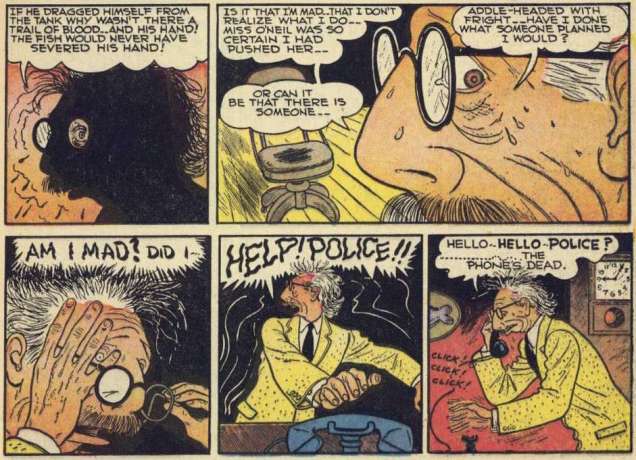 I enjoyed « Grave of Greed », the second half of the issue, even more, because it involves mushroom picking as part of the plot! 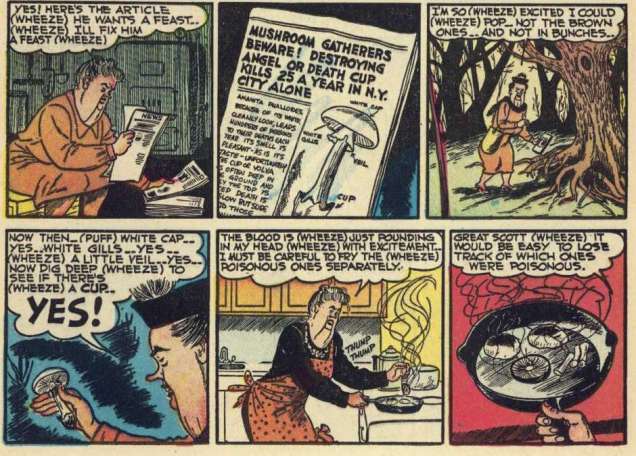 Read the full issue here – it’s worth the detour, I think!

Stay tuned for our next Tentacle Tuesday post! In the meantime, visit our previous TTs (we’re getting to have quite a backlog) for your tentacle fix.

On a damp and chilly night, is there a finer way to keep warm than huddling with your beloved?

Richard Decker, (b. Philadelphia, PA, May 6, 1907, d. November 1, 1988) fruitfully spent four decades as a contract cartoonist for the New Yorker. His association with the magazine began in 1929.

Along the same ordre d’idées, here’s a bonus piece about the evocative magic of old time radio, by long-time Gasoline Alley cartoonist (and bluegrass fiddler) Jim Scancarelli (b. 1941), from the April, 1979 issue of Child Life Magazine. 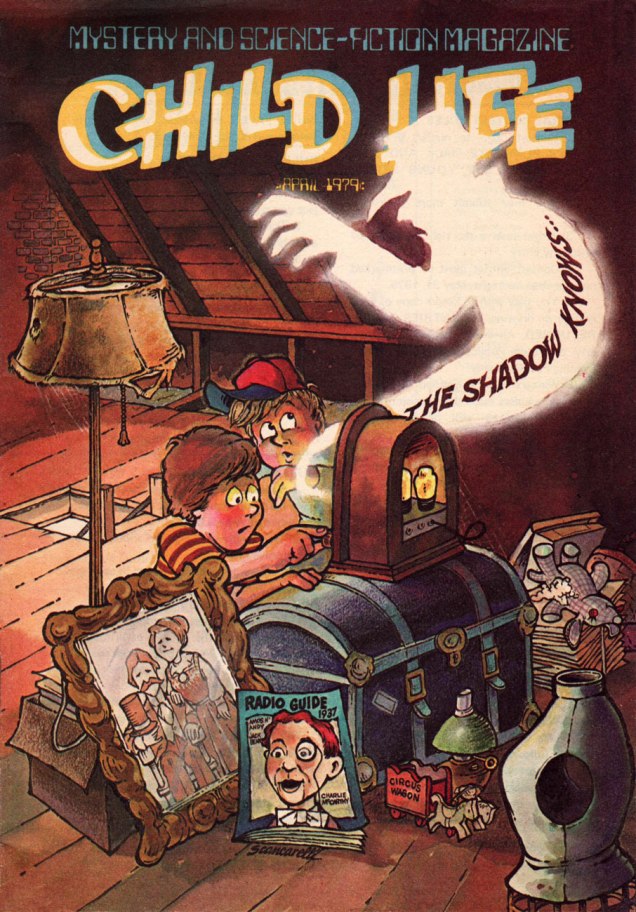 Care to fully capture and bask in this delicious melancholy? Go ahead, pour yourself a snifter of your favourite poison, hunker down in your coziest chair, and enjoy an episode or three of the classic The Shadow radio show, starring Orson Welles.