« The tentacles of  my followers shall seek you out and destroy your swiftly! »

If you like joyous nonsense, this post is for you! As if humanity wasn’t besieged enough by actual cephalopods, evil-but-brilliant minds insist on creating machines with tentacles to horrify and maim. Pain to some, amusement for us!

First, some definite eye candy. The following story is not only convincingly illustrated, but also makes some sense on a scientific basis. The Menace of the Mechanical Octopus was scripted by Ed Herron, and pencilled and inked by Jack Kirby. It was published in Word’s Finest Comics no. 97 (October 1958). 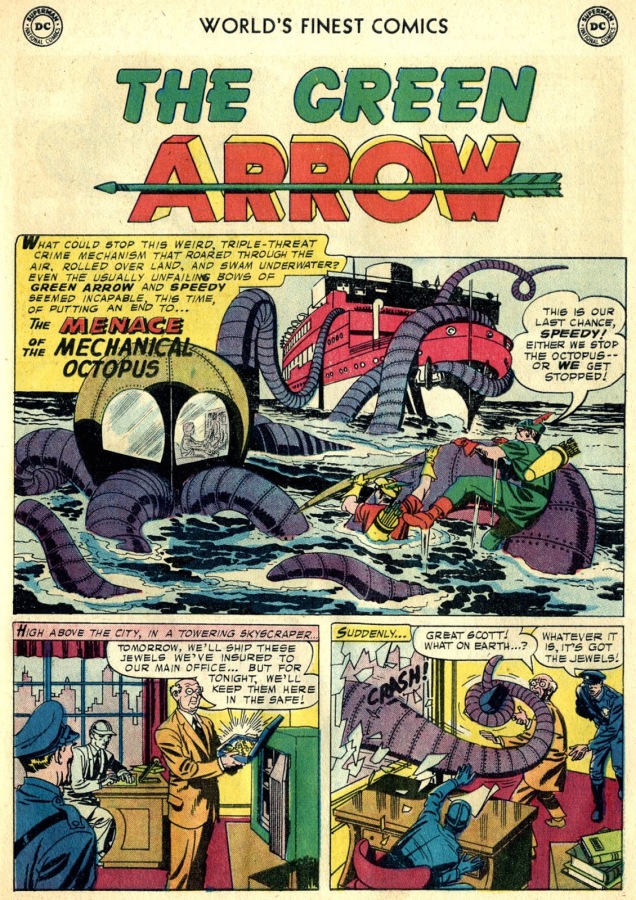 Now we move on to that goofy-yet-fun series, DC’s House of Mystery.  I will readily admit that I’m not always a fan. At worst, some of the stories published within its pages have plots so random that amusement becomes irritated incredulity. But keep an open mind, and there are also very creative (sometimes “were these people on drugs?” creative) plots to be enjoyed and great art to be relished.

The cover story, The Pirate Brain, was illustrated by Lee Elias: 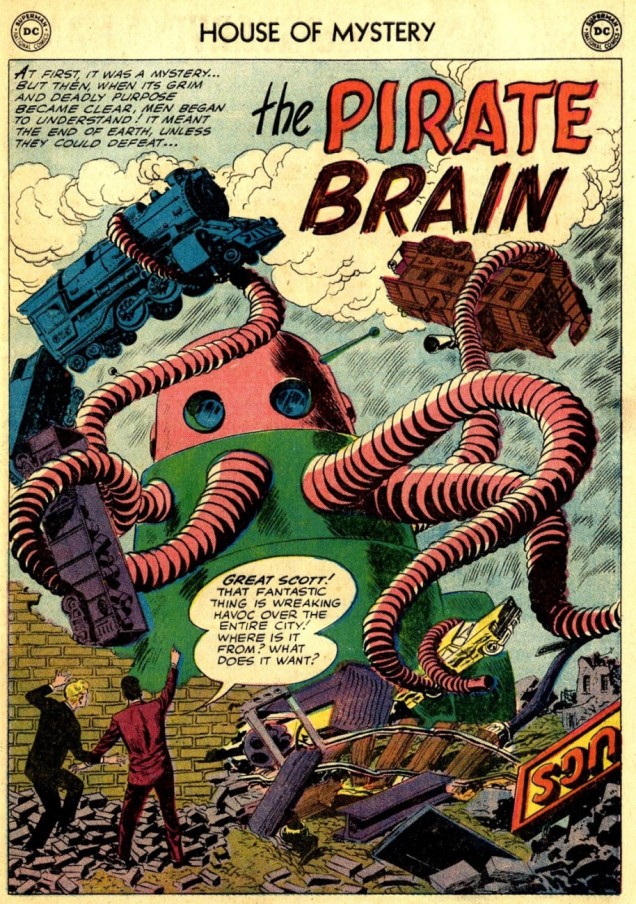 Our next stop concerns Robby Reed, the original owner of the Dial H for Hero gizmo, and his epic (of course) battle with… well, a whole bunch of villains. House of Mystery no. 156 (January 1966) is where he made his début, transforming into the Cometeer, Giantboy and the Mole. So many adventures, all in one (half) issue! This story was scripted by Dan Wood and illustrated by Jim Mooney: 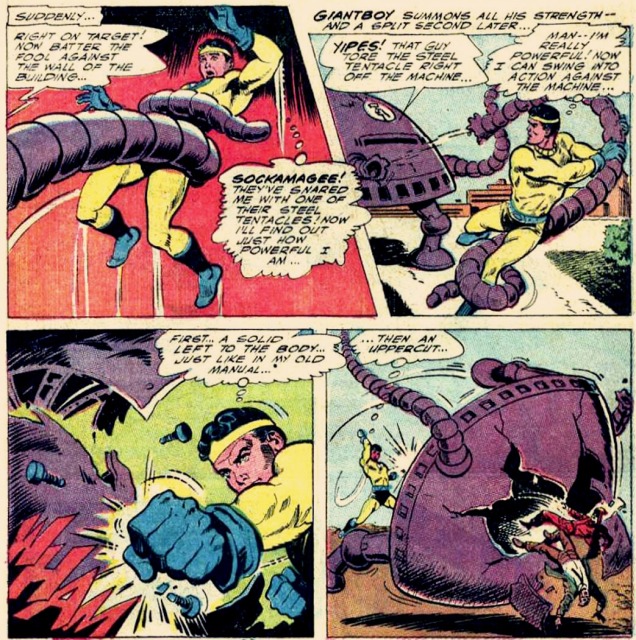 From Giantboy we move on to Colossal Boy, more precisely to Colossal Boy’s One-Man War, scripted by Jerry Siegel, pencilled by Curt Swan, and inked by Sheldon Moldoff. It was published in Adventure Comics no. 341 (February 1966).

Skipping ten years ahead, we end up in Marvel territory –

The cover story, The Day the Monuments Shattered, is scripted by Don McGregor and illustrated by P. Craig Russell:

As a final note, here are some indubitably mechanical, yet not-quite-tentacles – a worthy addition to this post, as far as I’m concerned.

If you liked this post, don’t forget to visit Tentacle Tuesday: Mechanical Tentacles, too!

« Polar exploration is at once the cleanest and most isolated way of having a bad time which has been devised. » ― Apsley Cherry-Garrard, The Worst Journey in the World (1922)

Here’s what happened: I was leafing through Paul C. Tumey‘s splendid comics anthology Screwball! The Cartoonists Who Made the Funnies Funny (2019, The Library of American Comics/IDW) when I came across a wonderful sample of Gene Ahern‘s Room and Board (1936-58) wherein the strip’s central figure, Judge Homer Puffle, feeds another boarder a steady line of bull in that grand, booming Baron Munchausen — Captain Geoffrey Spicer-Simson — Colonel Heeza Liar — Commander McBragg tradition.

Of course, it’s all piffle and bunk, but it brought to mind a passage from a favourite article on weather peculiarities in Siberia, Marcel Theroux‘s The Very, Very, Very Big Chill (published in Travel & Leisure in 2000):

« Local people told me that at minus 60 and below, a dense fog settles in the streets, and pedestrians leave recognizable outlines bored into the mist behind them. A drunkard’s tunnel will meander and then end abruptly over a prone body. At minus 72, the vapor in your breath freezes instantly and makes a tinkling sound called ‘the whisper of angels.’ »

Then I thought: « all very nice, but that makes for a rather meagre post »… so I decided to toss in a few bonus images featuring that venerable recurring motif… and got carried away.

Oh, and since I wouldn’t want any of you superhero aficionados to think I’m freezing you out, here’s another demonstration of Mr. Infantino‘s “encased in ice” idée fixe.

… and I can just about hear the « but what about Cap? » troops tromping down the hall, so… My co-admin ds was just telling me yesterday about a client who, upon remarking to a succession of winter-kvetchers that actually, we’d had a pretty mild January, was invariably met with goggling bafflement, as if he’d just then grown a second head. In related news, it was just announced that said month of January was, indeed, the planet’s warmest on record. There is, naturally, an xkcd strip about this sort of circular denialism.

« It was the town dandy! That spiffy cigar-store indian! Within the impact of a second I knew what I had to do! »  – Ron gets it wrong.

It’s become a historical footnote that, before fully settling into their (for a time) winning formula of lighthearted, cartoony monomania with Casper, Richie Rich, Little Dot and their ilk, Harvey Comics had published, pre-Code, some of the most, er… transgressive horror comics in the field. And before he settled down to designing and pencilling the lion’s share of Harvey Comics‘ admittedly inventive and arresting covers, art director Warren Kremer had fulfilled many of the same in-house duties in the more daring and diverse pre-Code years. A remarkably inventive and versatile artist, Kremer’s true worth has historically been obscured by his retiring, behind-the-scenes status, as well as the Harvey family’s plantation mentality. Today, let’s take a peek at the nuts and bolts of his collaborative partnership with cover artist Lee Elias, who would go on to become one of DC’s most straight-laced artists (though his talent remained undimmed.) It would seem, and it’s quite understandable, that a lot of artists who’d merrily produced horror comics in the early 1950s got burned by the ensuing censorious witch hunt / backlash… and became quite timid thereafter.

Another one? But of course!

Mr. Lubbers (pronounced LEW-bers) , born January 10, 1922, left us last summer at the venerable age of ninety-five. As it happens, he also left us some fine, fine artwork.

My initial encounter with Bob Lubbers‘ work came in 1978, when he provided a handful of covers and a couple of issues to Marvel’s Human Fly, a book about masked Canadian stuntman Rick Rojatt, whose real-life, non-funnybook story is a gripping read**. Anyway, the series was usually pencilled either by Lee Elias*** or by the mighty Frank Robbins; by the time Lubbers came along, Robbins had rightly had his fill, given the comics industry the one-finger salute and decamped to México to retire and paint in peace. Wise man.

I then became aware of Mr. Lubbers as one of the Golden Age’s primo ‘good girl’ cover artists, with Fiction House, no less. That’s what I’ll chiefly focus on here. Can you honestly blame me? Unlike some of his peers (hello, Bill Ward), he wasn’t just good at, and interested in, the saucy depiction of lightly-clad sirens: he could draw anything with finesse and brio.

Yet farther along, I would learn of his large and distinguished body of comic strip work: Long Sam, Secret Agent X-9, Tarzan, The Saint, Lil’ Abner, and best of all, his most personal work, Robin Malone (1967-70). On the latter, I can’t praise enough Tom Heintjes‘ definitive article (Hogan’s Alley no. 19, 2014), here’s a version of it: www.hoganmag.com/blog/the-life-and-death-of-robin-bob-lubbers-robin-malone

… and don’t forget to scroll down, down, down so you can sample (though it’s never enough!) the article’s lavish bounty Robin Malone Sunday strips.

*From the Captain Wings adventure « The Spider and the Fly-Guy » (Wings Comics no. 82) Read it right here (or pick from a generous selection of Wings Comics issues at Comicbookplus.com)

**speaking of which, check out this fine piece about The Human Fly’s rocket bike and the stunt that ended his career: http://kymichaelson.us/human-fly. You have to admit that jumping over 27 buses is a tad ambitious… and he was originally going to try for 36!

***likely picked for the job due to his fine work on another masked stuntperson character, Harvey’s The Black Cat.