« People think the show gave Letterman an opportunity, but they don’t see the table with 10 guys in shorts wearing baseball caps pitching jokes for things for him to say. They don’t see the index cards that say: ‘Ask this first.’ It’s all spelled out for him, and everything is pre-interviews. He’s basically had to be this hand puppet, with everybody’s hands up his butt to tell him what to say and do. » — Joyce Brabner on David Letterman

We already snuck a peek at the darker side of DC Comics’ short-lived ’80 mirage Wasteland (18 issues, 1987-89), but the title’s modus operandi was variety… within a set format. Here’s another highlight from one of the earliest and strongest issues, before its co-authors The Second City comedy legend Del Close and Grimjack co-creator John Ostrander lost the plot, interest, or both. This is American Squalor (Wasteland no. 3, Feb. 1988, DC Comics). The underrated Don Simpson, the Wasteland bullpen’s utility player, its most versatile and loyal member, gets to strut his stuff, albeit in a lovely Crumb ersatz, down to the lettering. 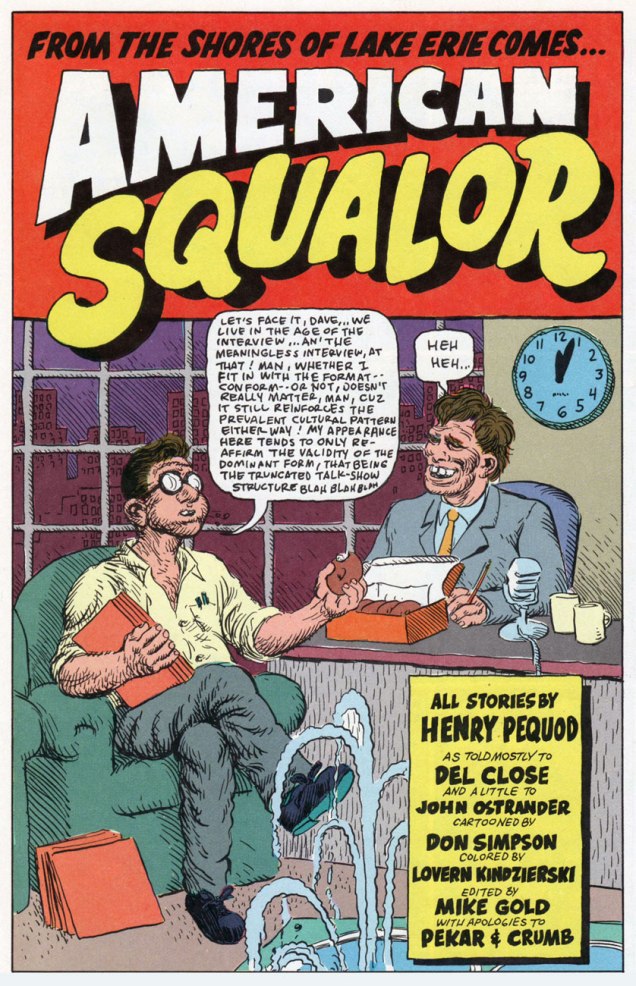 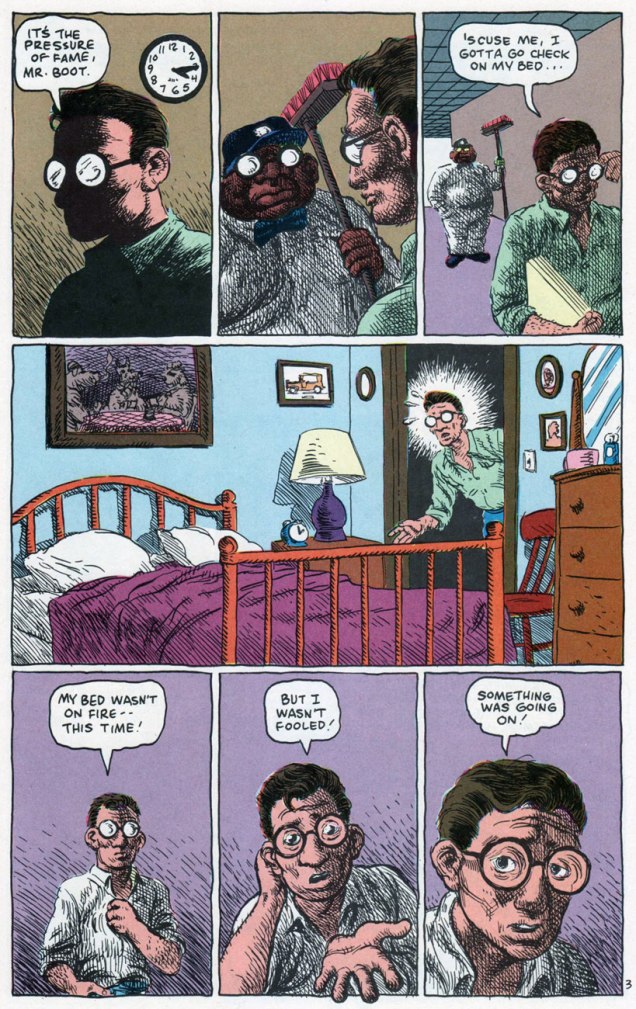 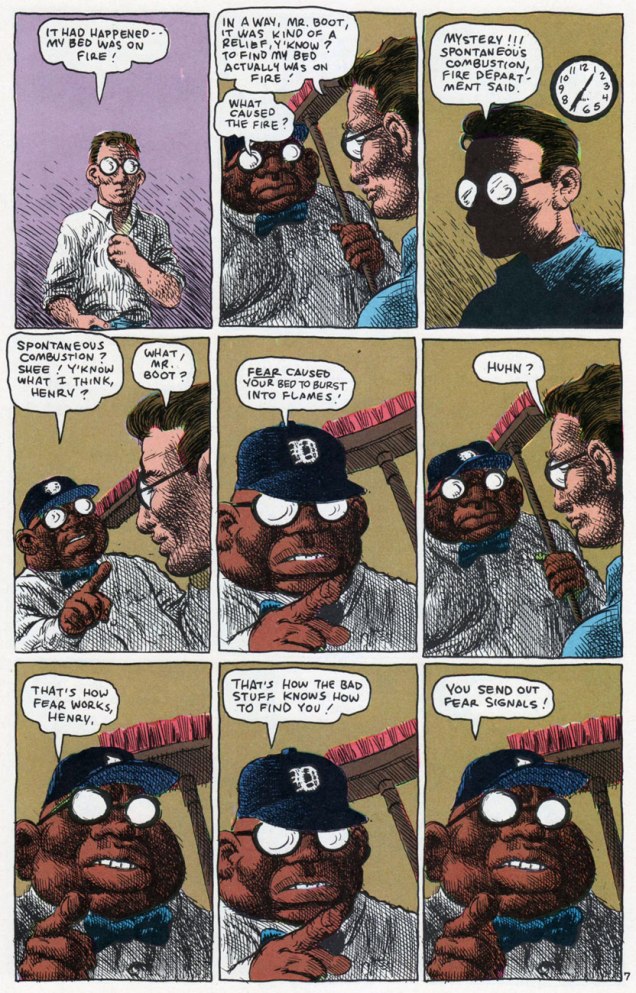 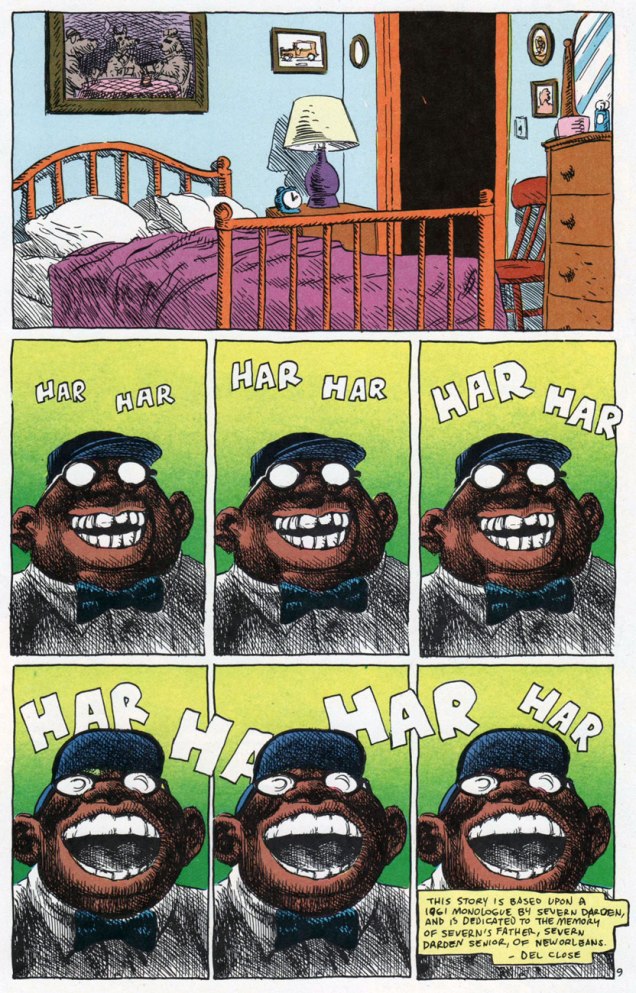 What I find so impressive about this story is the scope of its ambition, fulfilled on several unlikely levels: it achieves success as a parody, a pastiche, a tribute, and as its own, standalone bit of workaday folk philosophy. Clearly, calling upon the trappings and rhythms of Crumb and Pekar’s American Splendor was just the starting point.

I’d love to track down (Close’s old Second City colleague) the Severn Darden monologue Close claims to have used as a springboard, but not everything was dutifully recorded for “posterity” in those days…

« I loved Harvey. He was a wonderful guest. The kind you don’t see anymore. The only real problem with Harvey was my immaturity. » — David Letterman

« And it’s worse when I try to remember
When I think about then and now
I’d rather see it on the news at eleven
Sit back, and watch it run straight down »
— Warren Zevon, Run Straight Down (1989)

Just a brief little post today, with a thought to our friends in the USA who have an important opportunity coming up tomorrow.

Despite the vividness of his ‘cranky old man’ image, Harvey Pekar (1939-2010) wasn’t some coot screaming at the kids to get off his lonke or ranting about aliens in the drinking water. He was a keen-eyed observer with astounding perspective. Witness this unnervingly accurate and oh-so timely piece from eighteen years ago. Illustrated by Josh Neufeld, it was published as the back cover of the one-shot American Splendor: Bedtime Stories (2000, Dark Horse, edited by Diana Schutz). 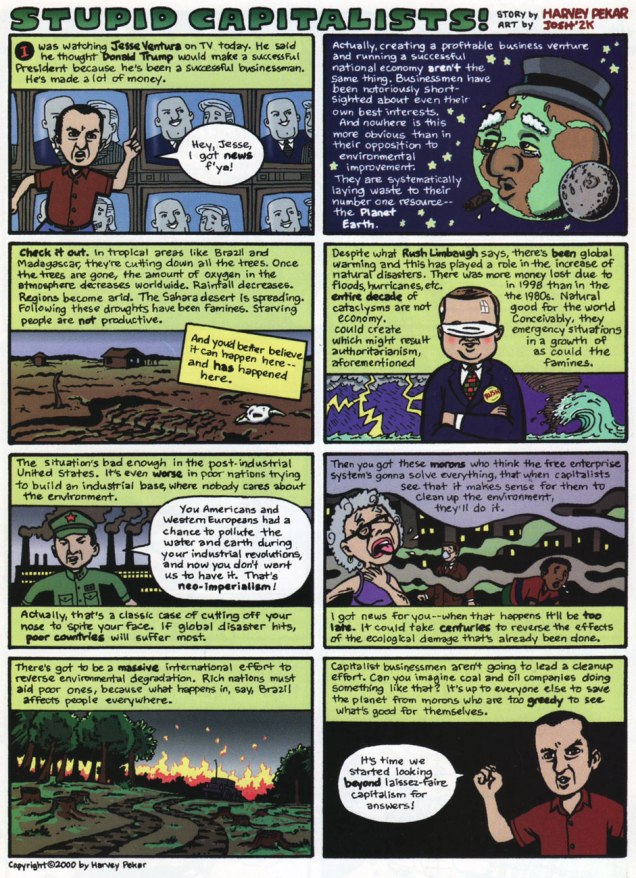 High time for a muzzling of a certain tiny fingered, Cheeto-faced, ferret wearing shitgibbon, wouldn’t you say? Make America Splendid again… do it for old Harv, do it for yourselves.

« What kind of people are these?
Where do they come from,
what do they do? What’s in a name? »

Coming out of nowhere (well, “From off the streets of Cleveland“, as it happens) in 1976, Harvey Pekar’s American Splendor was one of comics’ truest and most bracing alternatives. It wasn’t part of the Underground Comix movement, despite the participation of Pekar’s old friend and fellow record collector Robert Crumb, and it wasn’t like anything pushed out by the mainstream comics industry.

Crumb’s introduction to Doubleday/Dolphin’s 1986 anthology of early AS strips describes Pekar’s appeal better than anyone else is likely to:

« Yeah, Harvey is an ego-maniac; a classic case… a driven, compulsive, mad Jew… it’s something to see. But how else could he have gotten all those comics published, with almost no money; in total isolation from any comic-publishing ‘scene’ such as exists here in California, or in New York; constantly brow-beating artists to illustrate his stories; handling the distribution himself… only an ego-maniac would persist in the face of such odds. »

« The subject matter of these stories is so staggeringly mundane, it verges on the exotic! It is very disorienting at first, but after awhile you get with it. Myself, I love it… Pekar has proven once and for all that even the most seemingly dreary and monotonous of lives is filled with poignancy and heroic struggle. All it takes is someone with an eye to see, an ear to hear, and a demented, desperate Jewish mind to get it down on paper… there is drama in the most ordinary and routine of days, but it’s a subtle thing that gets lost in the shuffle… our personal struggles seem dull and drab compared with the thrilling, suspense-filled, action-packed lives of the characters who are pushed on us all the time in movies, tv shows, adventure novels and… those *other* comicbooks.

What Pekar does is certainly new to the comicbook medium. There’s never been anything even approaching this kind of stark realism. It’s hard enough to find it in literature, impossible in the movies and tv. It takes chutspah to tell it exactly the way it happened, with no adornment, no great wrap-up, no bizarre twist, nothing. Pekar’s genius is that he pulls this off, and does it with humor, pathos, all the drama you could ever want… and in a comic book yet! »

And here’s an atypical example of Mr. Pekar’s storytelling art, a rare but eloquent pantomime vignette. It originally saw print in DC Comics’ run of American Splendor comic books (no. 1, Nov. 2006, published under the Vertigo imprint and edited by Jonathan Vankin.) The symbiosis at play here between writer and artist makes ‘Delicacy’ my very favourite story by Hilary Barta, who somehow never gets matched with a script worthy of his tremendous talent, even when he’s working with Alan Moore (Moore can be very funny, but superhero parodies, even his, seldom are… and Splash Brannigan wasn’t exactly side-splitting). This is a wonderful oddity, one of two times that Barta and Pekar collaborated. Bon appétit!