« You can’t wake a person who is pretending to be asleep. » — Navajo saying (attributed)

I’ve written before of my appreciation of Joe Gill‘s long-running yet consistent ‘good guy with an edge‘ characterization of Billy Bonney, but I had stuck to the book’s exteriors, namely Warren Sattler’s watercolour covers from the final stage of the series’ original run. I’ve also — twice! (first here, then there) drawn attention to John Severin (1921-2012) and his colossal powers as a cover artist. Today, at long last, we dare to peer inside.

Some may wonder at the up-to-date slickness of our current selection. Bear with me. Sure, it’s old, sure, it’s obscure, and the original comic book it saw print in is on the pricey side… but it’s work that’s found some resolute champions in the intervening sixty years.

After the Charlton comics line made the switch to a mostly-reprints mode (circa 1977-78), executive editor (and cartoonist) George Wildman, possibly nudged along by his colleague Bill Pearson, endeavoured to harvest some dusty gems from the vast archives at his disposal. In this case, six consecutive issues (nos. 124-129) of the long-running Billy the Kid were aimed squarely at the discerning fans with a bold ‘All Severin Art‘ label.

Fast forward to just a couple of years ago. As the nefarious, multifarious Mort Todd* tells it: « I had the extreme honor of working with John for many years as a writer, penciller and editor. When comics creator Bill Black told me he had a complete run of John’s work on Billy the Kid in the form of Charlton’s original photostats, we decided to recolor the work and release it in two volumes. Since the original artwork is lost to history, these photostats are the closest things to the originals to reproduce from. »

When I approached him, Mr. Todd most graciously granted me permission to showcase an excerpt from his restoration of Messrs Gill and Severin’s efforts. If you enjoy this one, do check out morttodd.com for more goodies! 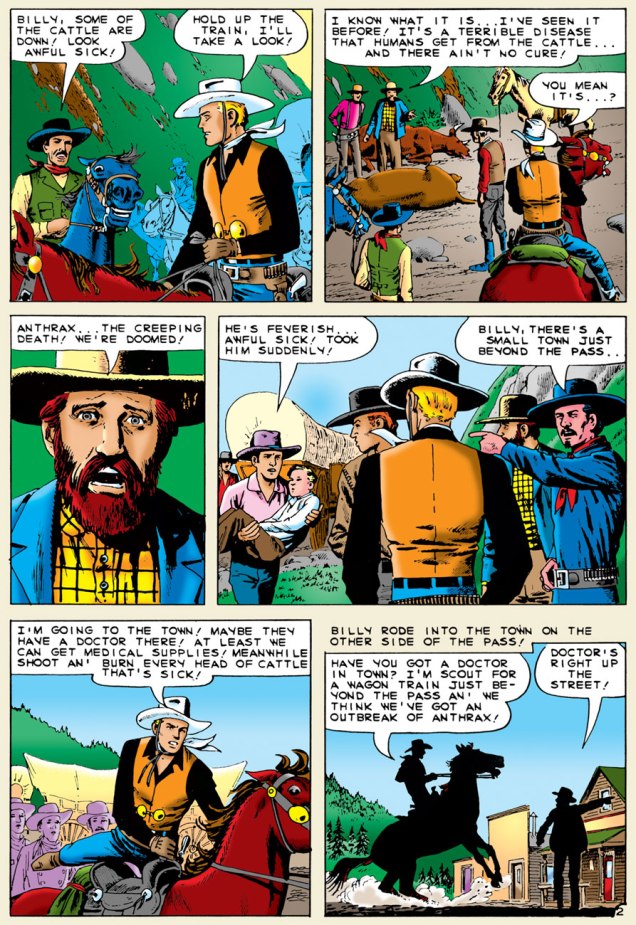 You may have noticed that this Billy the Kid fella displays some awfully progressive attitudes for 1959… and, some might say, even for today. And if you surmised that the story’s writer, Joe Gill, was a card-carrying liberal, you’d be way off the mark. He was, after all, Steve Ditko‘s favourite collaborator**. Gill was, instead, a bonafide conservative, fair-minded, intellectually honest, prudent, sagacious. It would appear that with time and shifting meanings and mores, this once-thriving breed has been overwhelmed by today’s  reactionaries, who arguably went so far as to usurp and absorb its very name.

By way of contrast, and speaking of cowboys… Marion Morrison*** (1907-79), better known as “Popular, handsome Hollywood Star John Wayne“, despite his renown as a so-called Conservative Icon, was no conservative… he was just another reactionary. I mean, just consider *his* stance towards African-Americans (« I believe in white supremacy until the blacks are educated to a point of responsibility. I don’t believe in giving authority and  positions of leadership and judgment to irresponsible people. ») or Native Americans…

Meanwhile, Gill’s Billy the Kid, though thoroughly adept at quick marksmanship and fisticuffs, always sought to defuse conflict and avoid bloodshed through wits and compassion. His idea of paradise (just like his real-life cousin, come to think of it) was to head South of the border into México and hang loose among his amigos, who good-naturedly called him El Chivito.

*whose name basically means “Death Death” in French and German (albeit with an extra D); how cool is that?

**“The comic book story/script writer? It doesn’t matter who follows the first. That first choice is Joe Gill.” — Mr. Ditko, from his preface to Steve Ditko’s 160-page Package no.3 (1999).

***And the likely inspiration for Shel Silverstein‘s story-song A Boy Named Sue, (popularized by Johnny Cash).

In the mid-1970s, thanks to Pat Boyette’s connections in Texas, Charlton Publications found themselves able to affordably produce painted covers, a development that several members of their iconoclastic stable of artists took full and glorious advantage of. Tom Sutton, Don Newton and Boyette were naturals, but Warren Sattler often gets unfairly sidelined from that esteemed lot… perhaps because he rarely worked for Charlton’s ghost books. Each of his cover paintings was produced for the publisher’s western / martial art adventure series, Yang, House of Yang, and Billy the Kid. And he alone worked in that most unforgiving of media, watercolours, wherein, unlike oils or acrylics, one requires unerring confidence and dexterity if you’re aiming to come up with anything above a muddy mess.

Today, Mr. Sattler (born September 7, 1934, in Meriden, Connecticut, where he resides to this day) celebrates his eighty-fourth birthday. Let’s wish him all the best!

Over the years, I’ve become quite enthused with Charlton’s long-running Billy the Kid series (1957-1983!), which featured over the years the artwork of such luminaries as John Severin, Maurice Whitman, Rocco “Rocke” Mastroserio, José Delbo and of course Mr. Sattler. As far as I know, Joe Gill just about wrote the entire series, which is one of its chief pleasures: over a hundred issues of consistent characterization of young Bill Bonney as a peace-loving, unprejudiced champion of the underdog whom his amigos in Old México fondly nicknamed « El Chivito ». I know, hardly the real-life Bill Bonney, but what could one expect under the Comics Code Authority‘s heavy thumb?

Several of Mr. Sattler’s cover paintings have, thank goodness, survived destruction. They have to be viewed in person to be fully appreciated. For the nonce, we’ll make do with mere digital reproductions. 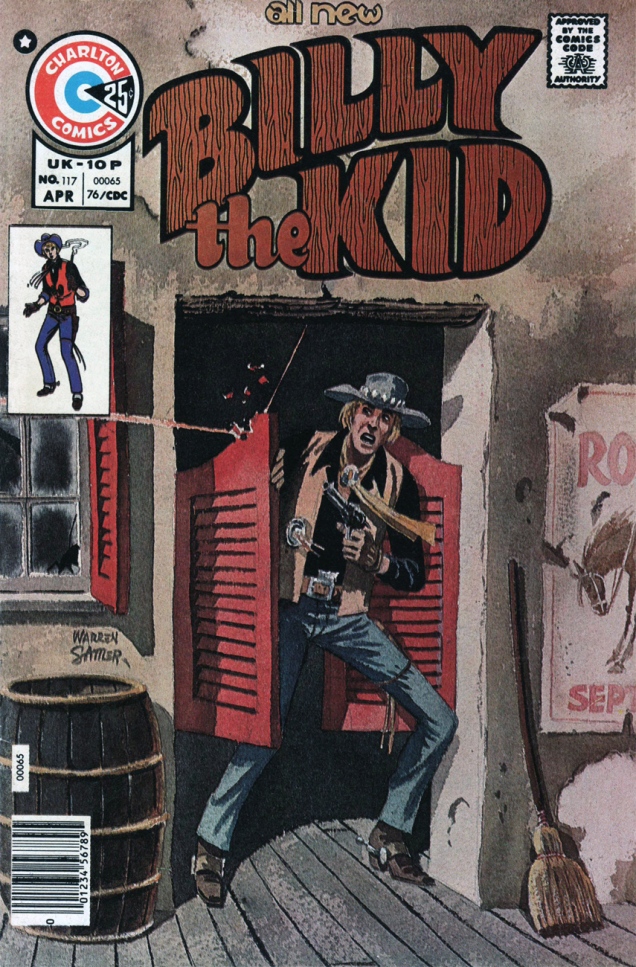 As El Chivito’s many friends across the border would surely say, « ¡Que cumplas muchos más! », and thanks for everything!