It surely won’t shock you that the most difficult decision, in such a countdown, lies in crowning numero uno. There are, after all, plenty of worthy candidates. But one also seeks to avoid undue repetition. After a couple of false starts, I opted for a long-time favourite that’s never received its due.

Here, then, is Steve Ditko (and an unknown scenarist)’s expertly-paced department store nightmare, “Halloween Scene”, from Scary Tales #7 (Sept. 1976, Charlton). It occurs to me that Mr. Ditko is about to turn 90 in a couple of days… they didn’t call him “Sturdy Steve” for the alliteration alone, as it turns out. 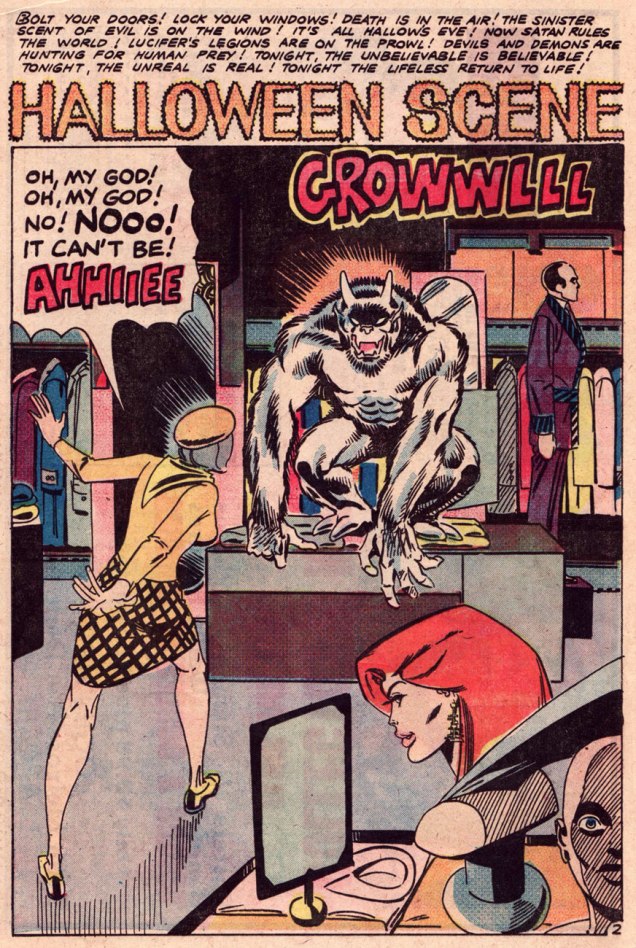 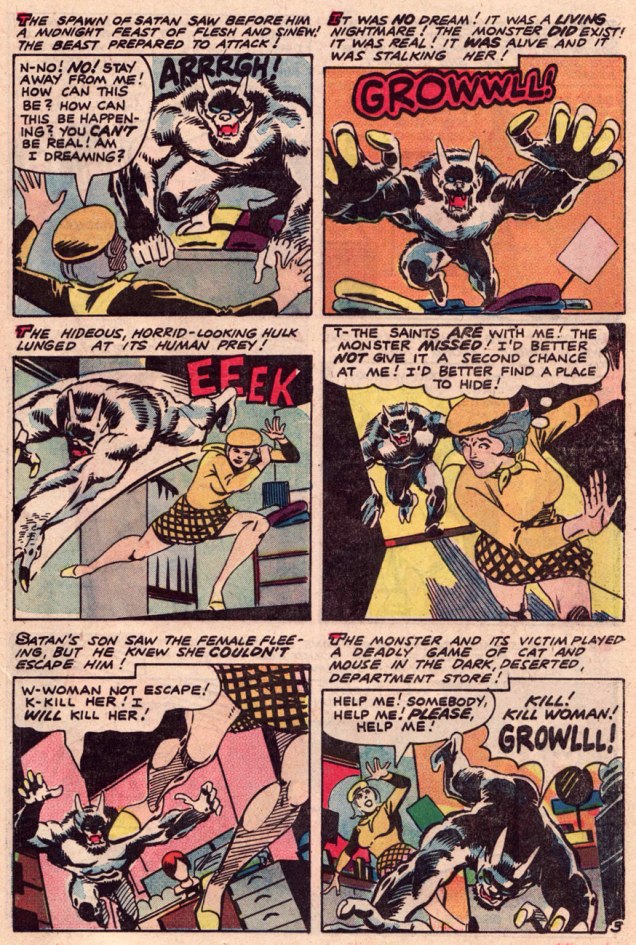 As a bonus (Hallowe’en comes but once a year, after all!), have a peek at the issue’s fine cover and its original art.

Well, that’s it for this year. Happy spookfest to all, and see you next time, hopefully.

I pity inanimate objects
Because they cannot move
From specks of dust to paperweights
Or a pound note sealed in resin
Plastic Santas in perpetual underwater snowstorms
Sculptures that appear to be moving but aren’t
I feel sorry for them all.

« Thought I’d inject a little excitement into this initiation… do I look any worse for wear? »

When EC überfan Russ Cochran launched his incredibly ambitious series of hardcover sets of the complete EC Comics in the late 1970s, there was simply no way I could afford the lot… so I gathered my shekels and mail-ordered a single volume of Tales From the Crypt (no. 3, midway through the run) and further managed to sweet-talk a nice lady at the local public library into ordering the first volume of Weird Science (years later, I would meet a couple of kids who’d become obsessed with the book, signing it out dozens of times and wondering how it had ever come to be acquired by our small, mostly francophone library).

Since the EC formula (meaning Bill Gaines & Al Feldstein) does wear thin with prolonged exposure, I gravitated to the outliers: Harvey Kurtzman, Johnny Craig, Bernie Krigstein, the Bradbury adaptations… but the true revelation in these volumes turned out to be John Benson and Bhob Stewart’s superb documentary notes, comprising astute analyses and eloquent interviews with the surviving participants… which are nowadays down to, well, colourist Marie Severin.

Anyhow, I was particularly intrigued by Gaines and Feldstein’s early system of “springboards”, which is to say that they based stories upon anecdotes encountered in newspapers and magazines. One title evoked time and again is Try and Stop Me (1944)*.

From John Benson’s documentary notes in Haunt of Fear, Volume 1 (1985):

« ‘House of Horror’ [Tales from the Crypt no. 21, Dec. 1950 – Jan. 1951] is even more directly derivative; the story is merely an elaborated version of an anecdote from the Trail of the Tingling Spine chapter of Bennett Cerf’s Try and Stop Me, which was the source of a number of EC stories. Kurtzman remembers the story as ‘an ass-breaker.‘ It was the first story he did for the EC line and he wanted to make a good impression. ‘It was the effort that got me the EC account.‘ ».

House of Horror was scripted by Ivan Klapper, who contributed a few stories, early in the EC horror titles’ run. He went on to work on John Newland‘s 1959-61 anthology show, One Step Beyond.

If you’re used to the usual rubbery, sketchy (but deceptively spontanous-looking) Kurtzman, brace yourself.

*I lucked out and found a nice copy in the 1980s… for $4.50, according to the usual lightly-pencilled note on the flyleaf.

Tom Eaton’s Oliver Cool strip appeared in The Saturday Evening Post Company’s Young World. YW had picked up, in 1972, the numbering (but not the title) of Western Publishing’s Golden Magazine. Of writer-illustrator Tom Eaton, little is to be found online, though he’s left a considerable body of work, such as fun books like Chicken-Fried Fudge and Other Cartoon Delights (1971), Captain Ecology, Pollution-Fighter (1974), Book of Marbles Marvels (1976) and The Beastly Gazette (1977). His Fizz & Farra in the Year 2250 comic strip also ran in Child Life magazine in the late ’70s.

A snatch of autobiography found on the back cover of Captain Ecology, circa 1974: « Tom Eaton is probably 30 or 40 years old, and lives with a tribe of baboons in a water tower on the outskirts of Chanute, Kansas. He writes and draws everything himself, with almost no help from his dog, Oscar. This is not his first book. His goal in life is to buy the state of Massachusetts and change its name to something he can spell. »

« I hope I will not be accused of undue vanity if I publicly thank Mr. Addams for immortalizing me in the person of the witch’s butler, to say nothing of the rather hairy gentleman whose clothes are strangely cut and who appears to subsist on a diet of bananas. »

Boris Karloff, from his foreword to the Addams collection Drawn and Quartered (Random House, 1942)

At the risk of being obvious, the ghoulish wit of Charles Addams brings us Hallowe’en on any old day of the year… but it’s no reason to take him for granted when the proper season slinks into view. Here’s a small selection of favourites. I’ve noticed that many latter-day collections have been plagued by terrible reproduction (heads should roll for that particular crime against art!), so I’ve gone back to the original collections in my library. Enjoy, fiends!

Marvel’s Dynamite Magazine ersatz, Pizzazz (15 issues, 1977-79), despite ratcheting its model’s celebrity coverage by several notches, while providing the House of Ideas’ usual rabid circle-jerking… wasn’t all bad. For one thing, there was its inspired recycling of Harvey Kurtzman’s splendid Hey Look! one-pagers from the 1940s, lovingly recoloured and presented with painstaking attribution. Fan on board!

And when Pizzazz reached beyond the Bullpen for ink slingers, it often struck paydirt, landing a heady mix of established and burgeoning talent, such as Jon Buller, John Holstrom, Bobby London, Ken Weiner (aka Ken Avidor), Rick Meyerowitz… and Graham Hunter.

Hunter was a bafflingly brilliant pick: his career in comics, as far as I know, consists in the main of a string (1946-47) of one-pagers featuring early soft drink product placement shill/mascot, the prosaically-named Pepsi, the Pepsi-Cola Cop. Guess what he was pushing!

Of greater interest is the handful of covers Hunter created for the surprisingly entertaining Catholic comic book Treasure Chest of Fun and Fact, and this is what must have landed him the Pizzazz gig, a couple decades down the pike.

Nailing this sort of humorous bird’s-eye-view crowd action scene requires some rather astonishing artistic chops. Perspective, proportions, movement, comic exaggeration… and that’s just the basics. This sort of thing was popularized by Dudley Fisher’s Right Around Home strip, which débuted in 1938.

« I’m doing some new phony ghost effects and these hicks just eat it up! Show ‘em a ghost and they’ll swear they recognize it! »

Is it just me, or are horror covers more effective when they’re basically wordless? EC and DC and Charlton got it, but Marvel never did, with its protagonists/victims standing around uselessly pointing out the obvious: “Oh no! We’re trapped with… the Thing that walks!” “Uh, honey, I think it’s more of a Thing that shambles!”

… and since this is our first, sadder Hallowe’en without the macabre Bernie Wrightson  (1948-2017) to inspire us, let’s have one more shot, shall we?

Interestingly, BW’s signature (at bottom, on the spine of a book in the centre) is reversed, which makes one wonder whether the image was flipped before dialogue was added. On the other hand, perhaps it made for better arcane lettering for a dusty grimoire.

« No, obese one. I am not dead… not in a manner you would comprehend. » 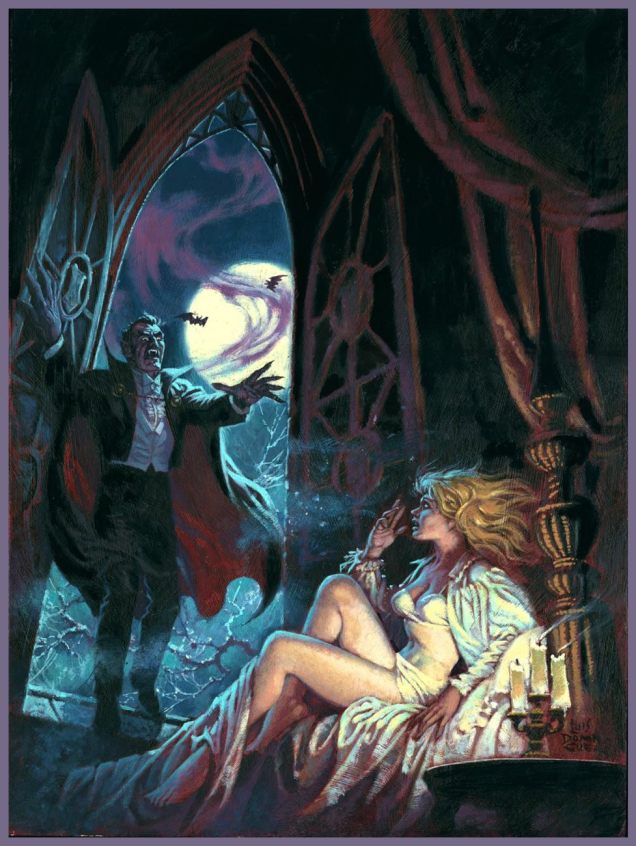 … and the printed version, bogged down with the usual Marvel ’nuff said (as if) hard sell copy. Now you know what you were missing. Sorry about that… it can be disconcerting.

To give credit where credit is due, the colour reproduction is pretty faithful and quite a bit of detail is retained. That hardly ever happened!

I bet you say that to all the boys.

Here’s a nostalgic entry cover-featuring the official bogeymen of Hallowe’en ’43: Adolf, Benito and Hirohito (Uncle Joe was still our “friend”.)

« Join the Group Gripe by sending in your own Bummer, and our Dynamite artist might pick your idea to illustrate. »

Bummers was a long-running feature (from the first to the final issue, in fact) in the pages of Scholastic’s Dynamite Magazine (165 issues, 1974-92), whose success was due, in no small part, to the winningly wobbly style of its illustrator, Jared Lee (b. 1943). 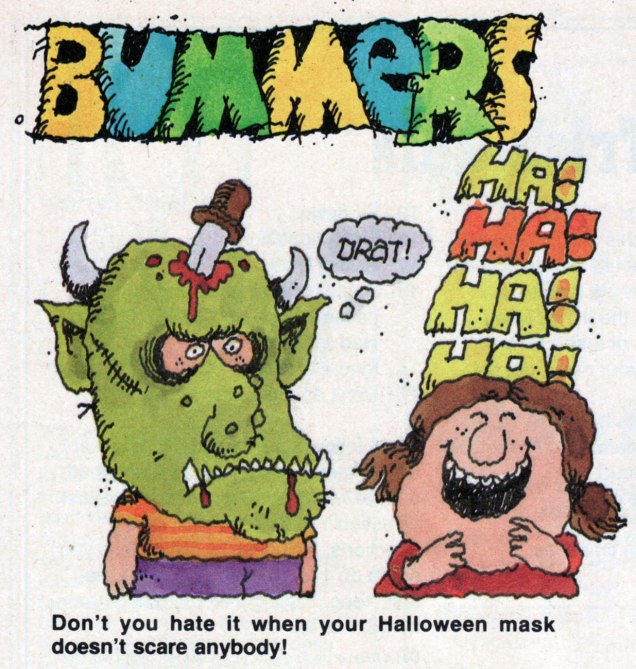 « Newly dead, the gases of decomposition moving in the stomach… moving the body like a rag doll whose lips flutter and belch… »

In the mid-1970s you could tell that Marvel was running low on reprintable pre-Code material when items from Men’s Adventure began to pop up in its mystery anthologies.

Since this was 1970s Marvel, the corpse is not only well-preserved, he’s buff as it gets. For comparison, read “Midnight in the Morgue” (writer unknown, art by Dick Ayers), with our thanks and a fond tip of the hat to The Horrors of It All blog.

A more haunting variation on the “trapped in the morgue with the not-quite-dead” theme is Nostalgia Press’ historically significant Horror Comics of the 1950’s (1971, edited by Bhob Stewart, Ron Barlow and original publisher Bill Gaines), which gathered, in full colour, 23 EC classics, including one previously unpublished story, An Eye for an Eye. The cover revives (ha!) Al Feldstein’s Tales From the Crypt no. 23 art from 1951.