Once upon a time, in a kingdom beyond the seven seas, a little boy lived under the name of Scott Richardson in a seaside town (let’s call it Gloucester and pretend it’s in Massachusetts). His whole family were artists, and he would watch his grandparents paint the sea, the ships that sailed it and the people who commanded the ships. It must have come as no surprise at all when the boy, too, started to draw. Eventually, he grew up, moved around a lot, almost started a major war and somewhere along the way, acquired the nom de plume of Tony Millionaire (which, according to him, « comes from Old French. It means a person who owns a thousand slaves. Serfs, not slaves. »

How’s that for a little fairytale? You will forgive me for the jejune introduction, but something about Millionaire’s art is magic. It is easy to underestimate how good an artist he is because his art is so cartoony, and his characters so outlandish: his award-winning, syndicated strip Maakies, for instance, concerns itself with a perpetually blotto stuffed crow (Drinky Crow) and his best pal, a sock monkey (Uncle Gabby). Both were TM’s childhood toys. All children make up stories about their playthings. What’s magic isn’t that he was able to create a world for his toys to inhabit, it’s that he was able to pull us, the audience, in with him.

His art is also stunning on a purely technical level: the impeccable geometry of his Victorian houses, the zest of his epic battle scenes (often between a whale and a kraken, it should be noted), the lushness of the gardens inhabited by fairies, gossiping insects having tea, and mice with puritanical sensibilities.

A couple of other things about Tony Millionaire: he’s really funny (or “drunkenly charming”, if you prefer; read his interview with John F. Kelly from 1999), and he clearly loves drawing tentacles, gleefully sticking them hither and tither. He’s clearly long overdue for an inauguration into the elite hall of Tentacle Tuesday Masters. I’m not here to provide you with hard facts about when and how, either about the newspaper strip Maakies or about the comic series Sock Monkey. You can get that from elsewhere. But I do believe that this is the only website where you can get your tentacle fix *and* your TM fix all at once (courtesy of co-admin RG who did all the scanning work!)

Anyway, enough of this chit-chat, and let the tentacles abound!

« Maakies is me spilling my guts… Writing and drawing about all the things that make me want to jump in the river, laughing at the horror of being alive. »

As fun as Maakies are, I find that one gets weary of them quickly – they’re like chips that burst with flavour to the point of causing desensitization. I believe that Sock Monkey is where Millionaire really gets to shine; I fondly remember being bowled over by Sock Monkey: the Inches Incident, in which TM really put his nautical sensibilities to use. The other books from this series only reinforced this impression – the art was so much lusher, and the moral complexity of these stories made each tale bittersweet. The artiste himself summarized it well, stating that « Sock Monkey is me trying to rise above all that bullshit, to be more poetic, looking at the bright side, remembering the things that used to delight me as a child. At the same time, the main theme to all the Sock Monkey books is the crashing of innocent fantasy into bone-crushing reality. » 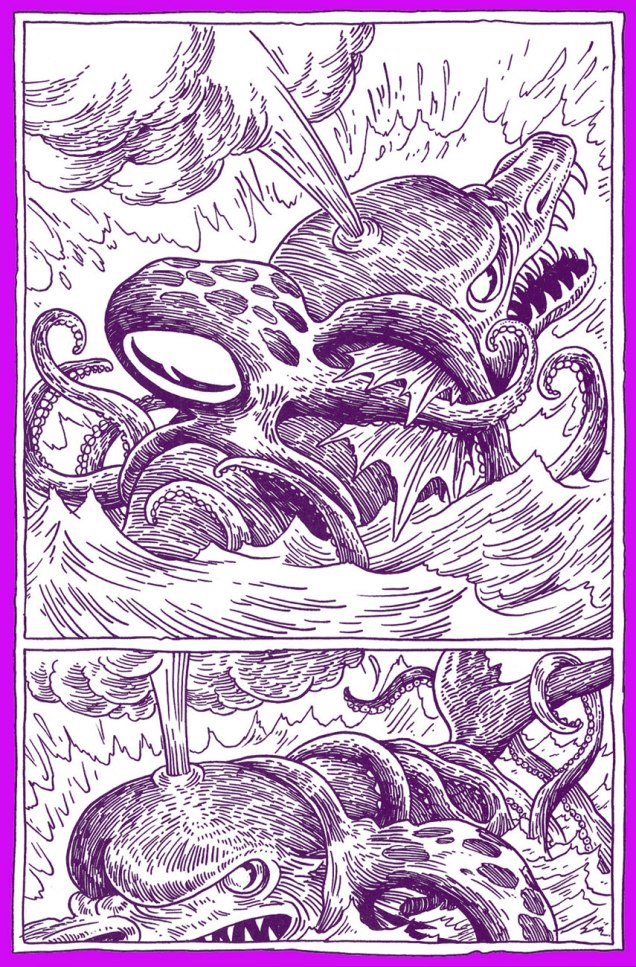 Fantagraphics published a full collection of Sock Monkey strips, but you can also read three of them right here online. I would of course strongly suggest supporting the publishing house and the author by purchasing the book, but what kind of high moral ground can it be if one is not offered a choice?