Today’s post may step a bit outside my usual purview, which is to say that the octopuses I am introducing do not come from the pages of comics per se. They’re used for mercantile purposes, to attract public to a concert, sell a book or deliver a message. But though they are octopuses in advertising, their artists still clearly have their hearts (and fingers) in the cartooning world.

Exhibit A is this cover for Centipede Press’ edition of Masters of Science Fiction: Fritz Leiber. This edition was limited to 500 numbered copies, so it will surprise no-one when I state that it’s quite sold out (See? Tentacles sell.) The cover is by Jim & Ruth Keegan, a wife-and-husband team, also the authors of the comic The Adventures of Two-Gun Bob.

Next, we have two music-related scenes, both from the Spanish side of things. ¡Fíjate!

The Roctopus Tea Party Festival takes place in Toledo, Spain. (Due to language constraints, I’m not exactly sure how many editions of it there have been.) Each poster features an octopus, but this is my favourite of the lot.

This Mardid “lunch box restaurant & tiki room” (now sadly defunct) held a series of “Galician lunches with DJ” splendidly named Día del Tentáculo. With a little Google Translate magic, I came up with this description: « Imagine a restaurant where you can eat hamburger with shiitake and jalapeños, drink the mythical Mai Tai cocktail or enjoy Tentacle Day with the best Galician octopus. And all while listening to good music in an environment inspired by the 50’s America. Sounds like an explosive mix, right? » The hamburger sounds good, but it’s really the Galician octopus that draws one in!

This one I spotted plastered over some other poster in my neighbourhood. It states something like « Ultimatum: provide wages for all internships at all levels, or we go on strike. » 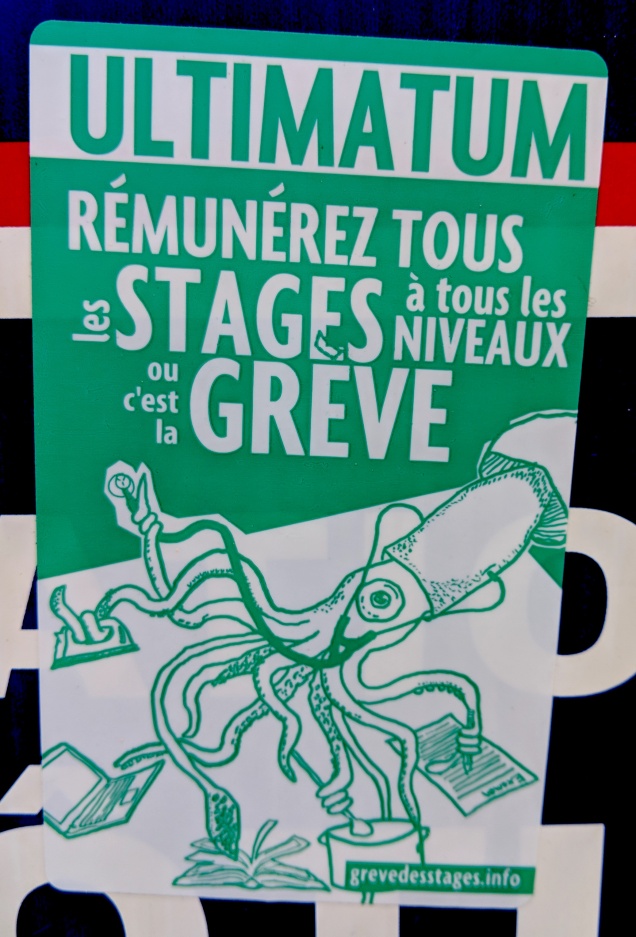 At first I assumed this was poster for a sci-fi convention in San Francisco, but it turned out to be the cover of a comics anthology published by Skodaman Press.